Joseph Heller between original and copy. Portrait by Lazarus Sichling according to a pencil drawing by Christian Lehmann, 1848 | SBB, HVG 41/147 between I Bb 2 and I Bb 2c 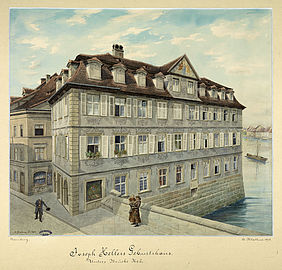 Joseph Heller’s birthplace at the Lower Bridge. Watercoloured drawing by Andreas Blattner, made on the occasion of Heller’s 100th birthday in 1898 | SBB, MvO A I 75 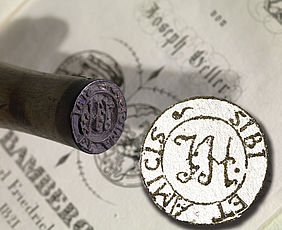 Stamp with Joseph Heller’s bookmark "Sibi et amicis" (Latin: "for himself and his friends") together with title page of his early work about Lucas Cranach | SBB, Akten A 54(2 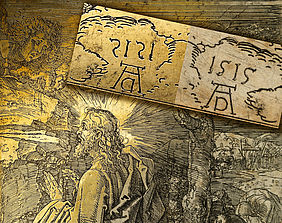 Christus on the Mount of Olives. Detail of the only surviving etching plate of Albrecht Dürer, including a print, 1515 | SBB, Kupferplatte 25 and I C 1

Bamberg State Library’s exhibition Joseph Heller and the Art of Collecting is reminiscent of an, not only regionally important, art collector and artist in collecting. At the same time, it presents the results of a research project dedicated to Heller.

A legacy in the heart of Bamberg

The Bamberg art scholar and collector Joseph Heller (1798–1849) declared the then Royal Library to the heir to his valuable art objects, reference library and written documents. In August 1851 the extensive and cross-genre modern papers were succesfully taken over. Heller is still considered to be one of the most important patrons of Bamberg State Library. A DFG-project carried out together with the German Documentation Center for Art History – Bildarchiv Foto Marburg and the Head Office of the Bavarian Library Network has been pursuing the goal of replicating the historical order of Heller’s collection digitally and making it accessible to everyone since 2017. A bundle of significant prints and drawings including works by Albrecht Dürer (1471–1528), Lucas Cranach the Elder (1472–1553) and Hans Holbein the Elder (1460–1524), were selected for this.

In Bamberg State Library’s Sterngewölbe the focus lies on the collector Heller and his mentor Heinrich Joachim Jaeck (1777–1847), who was library director at the time, and they even have a say there. Their lifelong friendship, strengthened by a trip that lead them through Germany, Austria and Italy in 1821, is retraced through the exhibits that were acquired along the way. The Scagliolasaal shows the library’s handling of the rich legacy. A media table expands the view on digital copies, including brief scientific descriptions, that were created in the course of the research project. Far more objects from Heller‘s modern papers can be seen here than could be presented in the exhibition rooms, and their connections to each other can be traced as well. In the reading room selected books reveal Heller’s lively publishing activity. They invite visitors to browse, to trace the focus of Heller’s collection and his areas of interest, which have not lost their relevance to this day.

Find out more about Joseph Heller and his art of collecting! Immerse yourself in his art world kept in Bamberg State Library!

Jospeph Heller’s Treasures on the Internet

The State Library presents one of the early focuses of Heller’s collection in the Bamberg Treasures, the prints and drawings by and according to Albrecht Dürer. Those interested can trace the sheet history of over 2000 works of art, including various states and sheet montages specific to this collection, on the basis of the freely usable, high-resoultion digital copies. Supplemented by brief scientific descriptions the works are linked to the books from Heller’s reference library as well as manuscripts and notes from his modern papers, which sheds light on the genesis and publication history of each graphic.

Accompanying Publication as an Interactive E-Book

Joseph Heller und die Kunst des Sammelns. Ein Vermächtnis im Herzen Bambergs – that’s the title of an interactive e-book, which is freely available online. The book gathers essays by several experts that bring the reader along on a journey into Joseph Heller’s "art world". It presents the collector as well as the genesis of his collection, the intention and task of Heller’s modern papers, the DFG-project and – using selected objects from the collection – some of the research potential hidden in Bamberg State Library. Linked image and literature sources lead directly into the digital collections, first and foremost those of the State Library. Each and every click opens up a way to object-specific information and further reading.

Joseph Heller and the Art of Collecting one of the virtual exhibitions presented by the Bamberg State Library on Google Arts & Culture, an art and culture service on the internet and as an app.